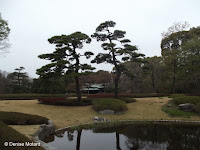 Some beautiful gardens in Japan Japanese gardens have a strikingly different appearance than western gardens. They have been developed over several centuries, taking their inspiration from the Chinese through Korea. The photos presented here ( click on list below ) were taken during a trip to Japan in March 2013. Japan has four distinct seasons in general, and in March the northern half of the country is still showing winter-like aspects, for example bare deciduous trees.  Because of this, views of the various places visited allowed a better emphasis on the garden structures (paths, ponds, bridges, sculptures, accessories, etc.) but also on the trees, especially their shapes & branches. It is also during the cold months that the elaborate winter-protection structures in the famous Kenroku-en Garden can be seen. March is also the month when the ‘ sakura front ’ (sakura zensen) starts. This is the name for the blooming of thousands of cherry trees across the
Read more